We've put together the ultimate movie fan fact or fiction about the film TITANIC - have a go and see how many you knew!
Titanic Movie
Titanic Facts

We've put together the ultimate movie fan fact or fiction so fans of the film TITANIC can become Titanic experts too!

Check them out below and see how many you might be aware of...

Although the story of Jack and Rose was fictional – there was a ‘J Dawson’ on board!

The ‘J’ stood for Joseph, not Jack, and he was a ‘coal trimmer’ on Titanic! James Cameron wasn’t aware of this until he finished the screen play!

The movie was roughly based on the discovery of the ship by American oceanographer Doctor Robert Ballard, who has visited Titanic Belfast on a number of occasions!

Titanic now lies off the coast of Newfoundland, Canada.

The majority of underwater shots from TITANIC in the movie are real!

James Cameron dived 12 times to the wreck to capture the ship authentically. In the Titanic Experience, guests can see unique footage of Titanic under the water and study artefacts left on the seabed.

Profiles of those on board can be found throughout the Titanic Experience galleries. International guests can also see how many people from their country were on board the ship using interactive pods.

The interiors in the movie are very accurate and were completed under the supervision of researchers of the White Star Line, the company that owned Titanic.

At Titanic Belfast, guests experience a virtual tour through Titanic’s decks, view sample First, Second and Third Class cabins, inspect the china used on board the White Star Line and walk along a replica promenade deck. They can also follow in the footsteps of Titanic’s First and Second Class passengers on-board SS Nomadic – Titanic’s tender ship and the last remaining White Star Line vessel. Nomadic is the largest Titanic artefact in the world - a quarter of Titanic’s size in every dimension, guests can marvel at the original ornate doors, panels, plasterwork and staircases, as well as see what life was like as a crew.

Like the movie, Wallace Hartley’s eight man band played on-board the boat deck as the ship went down.

Some people did decide to stay on-board whilst the ship sank. The couple that are pictured towards the end cuddling in bed represents the Stauss’, owners of Macy’s Department Store, New York, however they sat in armchairs on deck! As shown in the movie, Benjamin Guggenheim, one of the richest men on-board, and his valet, changed into their finest evening wear, and remarked 'We've dressed up in our best and are prepared to go down like gentlemen.' Rumour has it they were last seen on deck chairs in the foyer of the Grand Staircase sipping brandy and smoking cigars. 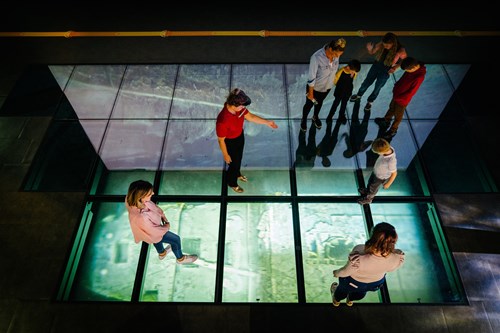 The ship did break apart as it sank.

Guests can stand on the glass floor in the 'Titanic Beneath' gallery at Titanic Belfast as the two parts of the ship pass by underneath you!

Two lifeboats did return to the wreckage immediately after the sinking – similar to what happened to Rose in the movie.

However, only six passengers were saved by from the water by them. An example lifeboat is shown in Titanic Experience galleries.