To mark the 35th anniversary of the discovery of RMS Titanic on the 1st September 1985, Dan Gordon, Northern Irish actor, director and playwright, specifically of the critically acclaimed The Boat Factory, a play about the Harland and Wolff Shipyard where his ancestors worked, is challenging locals to discover more about RMS Titanic this Autumn along the Maritime Mile.

Dan is aware that everyone thinks they know the story of RMS Titanic but he has been revisiting his roots and pulling out the archives to discover ‘Titanafacts’ and some of the best stories about the ‘Boat Factory’ or ‘his family firm’ that locals, kids and adults alike, should know!

Dan commented, “On this day, 35 years ago, Dr Robert Ballard and French diving engineer Jean-Louis Michel discovered the world’s most famous ship’s final resting place and the world was captivated but she was built here, by us. Being from Northern Ireland, we all think we know the story and there is nothing new to discover. However, Belfast is the home of RMS Titanic, her history is ingrained here and it’s our duty to keep the story alive for future generations. Therefore, I’m encouraging locals to look closer, go deeper and be surprised by what they didn’t know this Autumn.” 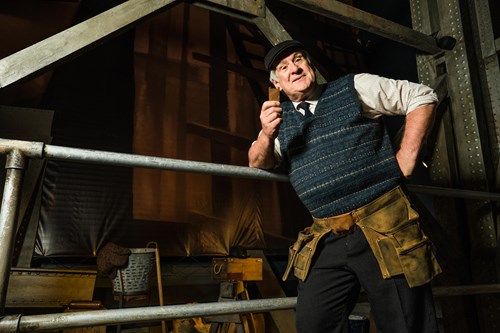 Judith Owens, our Chief Executive said, “At Titanic Belfast, we celebrate the hard work and ambition that built RMS Titanic so naturally we love Titanafacts and will be sharing Dan’s favourites throughout the month of September on our social channels. To support Dan in his mission to get locals to rediscover RMS Titanic this Autumn, we are running our Kids Go Free offer throughout September and October so families can enjoy Titanic Belfast and SS Nomadic and discover the world-famous story right on their doorstep.”

Kerrie Sweeney, Chief Executive of Titanic Foundation, commented, “Visitors can also create Titanic Memories along the Maritime Mile. Titanic Belfast, the building itself and the surrounding area has secrets and symbolism ingrained in it, and as such we have developed a new Maritime Mile Treasure Trail for families to learn more about Belfast’s iconic waterfront or for those who want to delve deeper and learn more about the men who built the ship they can visit our free exhibition – Out of Stores – in Titanic Belfast’s Andrews Gallery, showing how Belfast’s shipbuilding legacy was born.”

- Some ‘Titanafacts’ are courtesy of Dan’s Pat and Plain Play.

Tickets for the Titanic Experience must be booked in advance here.
Please also take a look at our Confidence Charter ahead of your visit!
Share