The launch of the Union-Castle motor vessel Carnarvon Castle¹ on 14 January 1926 marked the completion of one man’s remarkable career spanning thirty-two years of shipbuilding on Queen’s Island. 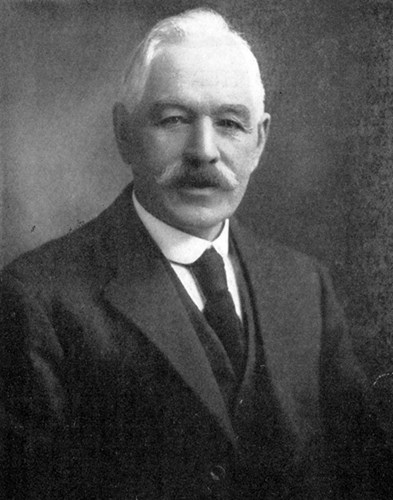 Of the fourteen four-funnelled liners, built between the years 1897 and 1922, four were constructed at Belfast, the largest number by a single British yard and Keith supervised and launched every one.

That one man at the head of a small team of shipwrights should have been entrusted with the responsibility for launching so many important vessels is a record unequalled in the history of shipbuilding.

As was the custom with the White Star Line no christening ceremony was performed at the launch of one of their steamships; ‘they just builds em, and shoves em in!’ declared one shipyard worker. Despite the lack of public ceremony preparations for the launch of Titanic were very complex. In order to transfer the weight of the hull from the building blocks on which she was constructed to the launchway it was necessary to remove the shores, bilge blocks and keel blocks. Once the shipwrights had completed this difficult task a wooden cradle supported Titanic’s bows. The only thing preventing her from running away were dog shores held in place by wedges. The keel blocks were removed first, an operation carried out carefully and methodically. The shipwrights worked along the whole length of the keel marking certain sets of blocks respectively with red, white and blue paint, indicating the order in which they were to be split out or removed. Splitting out involved inserting a chisel in the cap piece of the block and literally splitting the wood away with sledge hammers. The blocks painted red were split out twenty-four hours before Titanic’s launch.

Early on the morning of the 31st the white blocks were split out and just a few hours before the launch the blue blocks were split out. These blocks were located under her stern and as the tide rose (the wooden cofferdam at the end of the slips had already been removed) the shipwrights quickly worked forward, towards the bow, ahead of the rising water. The standing ways were already coated with a mixture of twenty-three tons of tallow, train oil and soft soap³ allowing the sliding ways beneath the hull of Titanic to move down the permanent ways. At this moment the only thing preventing Titanic moving were the dog shores and the massive launching trigger held in place by water under hydraulic pressure controlled by a valve and pressure gauge with a large release lever attached. 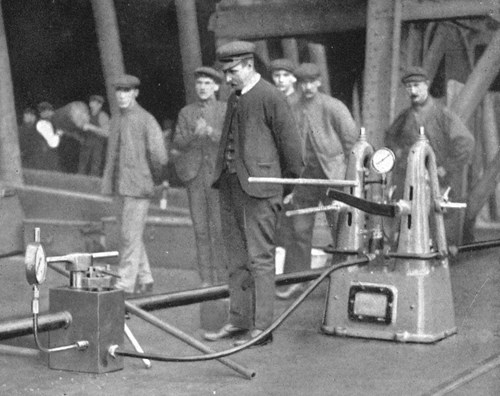 At 12.05pm two signal rockets were fired and Keith’s shipwrights, working in squads, quickly started to knock out the dog shores, a third rocket five minutes later indicated that she was almost ready to launch. A few minutes later Keith depressed the lever allowing the launching triggers to drop. Immediately he opened a second valve which operated the hydraulic rams connected to the sliding ways and at 12.13pm Titanic started to move for the first time. Amid cheers from the assembled crowd of 100,000 spectators the hull gathered speed, estimated at 12 knots (almost 14 miles per hour) as she entered the water.

Two piles of heavy drag chains, each weighing eighty tons and six massive anchors attached to the hull drew her to a standstill after she had travelled almost twice her length in just sixty-two seconds. What Keith’s thoughts were at the launch we shall probably never know, but what we do know is that as soon as Titanic was afloat the heavy and difficult work of clearing the slipway and salvaging the launching cradle and all the timber dragged into the Victoria Channel began. The launch was faultless and Keith repeated the work for other enormous liners like Statendam and Britannic (the largest British built steamer until Cunard’s Queen Mary in 1936) before the First World War.

Keith, the eldest of seven children, was born in Longbenton, Northumberland on 15 December 1861. His father, also named Robert Falconer and grandfather, Alexander, were both born in Aberdeenshire and employed as shipwright and joiner respectively. In the late 1850s Keith’s father moved from Aberdeen to Northumberland in search of work and found employment in one of the shipyards along the banks of the River Tyne.

He married a local girl and the family eventually settled in Tynemouth. Their son, after attending a Methodist school, served his apprenticeship with Sir W. G. Armstrong at Newcastle-on-Tyne and was made a foreman there before his apprenticeship was completed. He subsequently became associated with the Naval Construction & Armament Co. Ltd. of Barrow-in-Furness, Messrs. Swan & Hunter of Wallsend and Messrs. J. L. Thompson & Sons of Sunderland. It was while working with this last company that Keith married Margaret Jane Hodgson at the Methodist Holy Trinity Church, Southwick, ten days after his 22nd birthday, on Christmas Day 1883.

In March 1894 he joined Harland & Wolff; Keith’s experience as a skilled all-round ship’s carpenter, experienced in building all classes of wooden vessel made him the perfect choice to take up the position of head foreman shipwright in a yard where tonnage output was increasing year on year to record levels.

The ever increasing size of vessels put extra demands on the shipwrights responsible for building the launching ways; this vital part of the shipbuilding process required great skill because any subsidence would result in structural failure of the hull under construction. Shipwrights also built the launching cradles and dealt with all the arrangements connected with the launching of a vessel. In the yard Keith supervised all wood construction, prepared the ground for the keel blocks, lay the blocks at the correct height and inclination and secured them against tripping. Before the Arrol Gantry was constructed all the wooden staging around building berths, which this steel structure partly replaced, were also the responsibility of the shipwrights’ department. The wooden decks, hold ceilings, sparring, wooden framework for awnings, boat chokes, store gangways and a myriad of other fittings and tasks including the dry-docking of vessels were all the responsibility of Keith and his team of shipwrights. 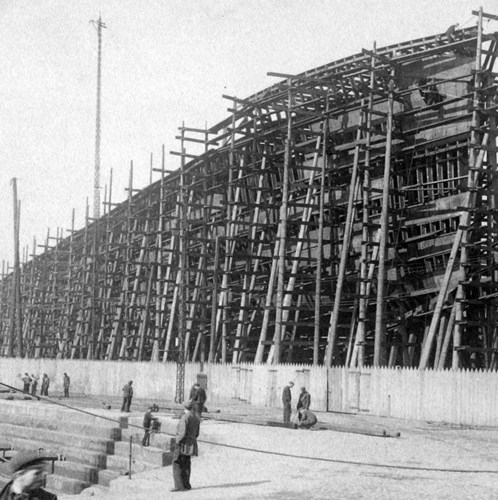 An estimated 810 vessels were dry-docked in the Hamilton, Alexandra and Thompson Graving Docks and a large number hauled out on the patent slipway during his time in the yard - much of this work, particularly the warping of Olympic, Titanic and Britannic into the Thompson Graving Dock was difficult, demanding great ability and skill from those engaged and from Keith who was personally in charge of these operations.

During the First World War, in addition to his ordinary duties, Keith had a considerable amount of extra work in connection with the conversion of several vessels into dummy warships. These were ordinary merchant vessels, cleverly adapted with the use of wood and canvas to create gun turrets, deck superstructures and the profile of a warship in order to confuse and mislead the enemy. The docking of all types of merchant and military vessels, many damaged by mine or torpedo attack, were also directed by Keith without mishap.

It is clear that Keith was held in high esteem by all those who worked under him in the shipwrights’ department and at his retirement held on Queen’s Island he was entertained to a ‘smoker’ and presented with a wallet full of ‘Treasury notes’ by William Grant, MP for North Belfast. Another presentation was a ‘handsome’ pair of binoculars by James McWhirter, JP, on behalf of the Shipwrights’ Association.

His family comprised seven children - four were born in England and of the three born in Ireland the youngest, a girl, died age 7 years. The family tradition of naming their first boy after the father was set and in 1911, when the family lived at 3 Inverary Drive, Co. Down, a short distance from Harland & Wolff, 26 year old Robert Falconer Keith was employed as a ship draughtsman in the company’s Drawing Offices and his younger brother, Thomas, as a mechanical engineer and draughtsman. Little is known about Keith’s life in retirement. His wife Margaret died in 1928, aged 66 years.

At the time of Keith’s death, on 6 January 1940, he was 79 years of age. Two days later a large gathering of family, friends and former shipyard colleagues attended his funeral service and internment at Dundonald Cemetery on the Upper Newtownards Road.

Until now the story of Robert Falconer Keith has never been told. From now on the author hopes his place in shipbuilding history and in the story of one particular vessel will always be remembered.

3. Tallow was rendered beef or mutton fat. Train oil, actually oil from the sperm whale, was considered the finest lubricant available. Soft soap was added to help the animal fat and whale oil blend together. The resulting mixture, off-white in colour, was applied to the launchways; not a job for the faint hearted because in warm weather the smell was described as disgusting. In a number of photographs, following a launch, the permanent ways gave the appearance of being covered in ice.