Finding Titanic: From Search to Seabed

Although the Titanic lies in 13,000 feet of water, the enduring story still captures minds and hearts throughout the world.

As we mark the Anniversary of Titanic’s Discovery on 1st September 1985, we take a look at the events leading up to the first sighting of the wreck of the world's most famous ship! 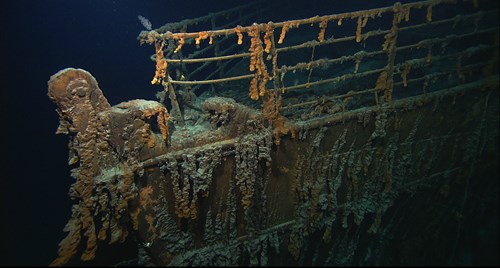 Almost immediately after Titanic sank a number of proposals were put forward to salvage her from her resting place, despite her exact location & condition being unknown.

A variety of audacious & impractical schemes were proposed, including ideas such as using balloons & electromagnets to float the ship to the surface. However all of these fell foul due to practical and technological difficulties, as well as lack of funding and a lack of understanding of conditions at the wreck site.

The first serious attempt to salvage Titanic took place in July 1953 by Risdon Beazley Ltd, a Southampton-based salvage company, however this was unsuccessful.

Throughout the 1960s and 70s many other proposals were put forward, with most being abandoned for financial reasons. 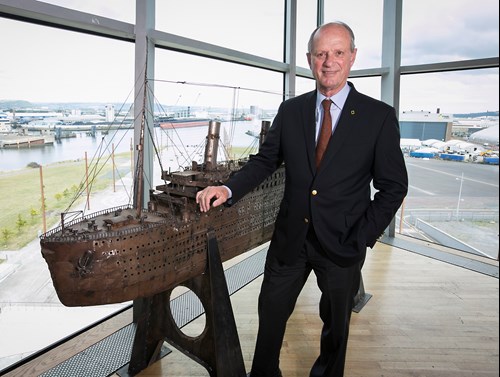 Dr Ballard, who would eventually go on to discover RMS Titanic, thought about searching for the wreck as early as 1973. In October 1977 he made his first attempt to find the ship with the deep sea salvage vessel Seaprobe - essentially a drillship with sonar equipment and cameras attached to the end of the drilling pipe. Sadly the expedition ended in failure when the drilling pipe broke.

Between 1980-1983 Texan oilman Jack Grimm launched 3 expeditions to find Titanic, none of which were successful. However it later transpired that the sonar Sea MARC Grimm used in 1980, passed over Titanic but failed to detect it, while his sonar Deep Tow - used in his 1981 expedition, passed within 1.5 miles of the wreck!

Despite his first voyage failing, Dr Ballard didn’t give up hope - devising new technologies & search strategies to tackle the problem. This technology was a system called Argo/Jason.

A remote controlled deep-sea vehicle ‘Argo’ was equipped with sonar and cameras and towed behind a ship with a robot – ‘Jason’, tethered to it roaming the sea floor taking images and gathering specimens. Images from the system would be transmitted back to a control room on the towing vessel where they could be assessed immediately by the team on-board.

In 1982, Ballard approached the Navy about his new deep sea underwater robot craft, Argo - and his search for Titanic. The Navy wasn’t interested in financing a search for the lost ocean liner, but they were interested in finding two of their missing submarines - USS Thresher & USS Scorpion. They agreed they would finance Ballard's Titanic search only if he first searched for & investigated the two sunken submarines.

In 1984 Dr Ballard and Argo discovered the wrecks of sunken nuclear submarines, lost in the North Atlantic, and in 1985 a second expedition to map the wreck of USS Scorpion was mounted. 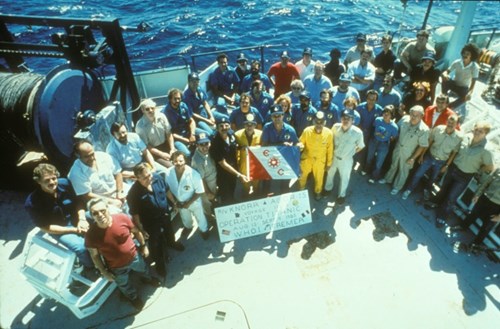 Dr Ballard and team pictured with the Explorers Club Flag.

To make the most of the short time they had, Dr Ballard decided extra manpower would be needed and brought French diving engineer Jean-Louis Michel and team on board to help with the search.

On 22nd August 1985 Dr Ballard and his team arrived on site on R/V Knorr and deployed Argo to begin the search.

When searching for the Navy submarines, Ballard and his team had discovered that they had imploded from the immense pressure at depth - littering thousands of pieces of debris over the ocean floor. Following this trail of debris led directly to the submarines.

Using that lesson, they had Argo sweep back and forth across the ocean floor looking for Titanic's debris trail while the team took shifts monitoring the video feed for any abnormalities.

At 12.48am on Sunday, 1 September 1985 observers sighted debris on the smooth ocean floor and the rest of the team was awakened.

Finally, a boiler was sighted - identical to those shown in pictures from 1911, and soon after that the hull was discovered.

The wreck lies in 2 main pieces, about a third of a mile apart. While the debris field surrounding the wreck covers about 5 x 3 miles. The bow is still largely recognisable, and has a great deal of preserved interiors, while the stern is completely ruined from damage during the sinking.

The discovery made headlines around the world, with Argo sending out the first pictures of Titanic since her sinking, 73 years before.