On the morning of 20 April 1912, Lapland (part of the same shipping combine that owned the White Star Line), departed from New York’s Pier 61 for England with 172 survivors of Titanic’s crew, among this number were 20 stewardesses.

Lapland also carried 1,927 sacks of the US Mail, intended for Titanic’s return voyage.

At Sandy Hook the liner was detained by US officials while five crewmen, including Titanic’s quartermaster Robert Hitchens, were taken off at the request of Senator Smith, Chairman of the Titanic investigation, who wished to further question the men about newly discovered evidence.

Lapland eventually arrived at Plymouth on the morning of the 28th. The liner anchored some distance from the docks while Titanic’s crew were disembarked into the Great Western Railway tender Sir Richard Grenville. The men were kept together pending their appearance at the British investigation into the loss of their ship. 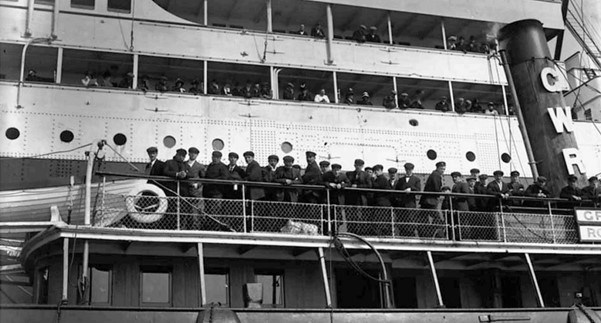