14th April 1912 - Titanic’s 24-year old look-out man Frederick Fleet, through a slight haze, spotted what he later described as something ‘about the size of two tables’ lying directly in the vessel’s path. He immediately rang the ship’s crow’s nest bell three times and telephoned the Bridge and reported to Sixth Officer James P. Moody. The deck officer asked 'What do you see?', Fleet replied ‘Iceberg right ahead’ and Moody ended their short conversation with 'Thank you.'

The message was immediately relayed to First Officer William Murdoch who ordered the engines full astern and the helm hard-a-starboard. As Titanic slowly turned to port (in 1912 helm orders were the reverse, a leftover from sailing ship days) at 11.40pm she collided with an iceberg. The impact caused underwater damaged to her first six compartments, the first five flooding out of control.

She eventually sank during the early hours of the following morning - the 15th April 1912 - after approximately 2 hours 40 minutes. 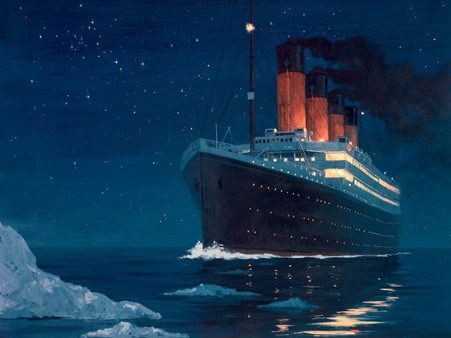